CARS ARE OUR PASSION 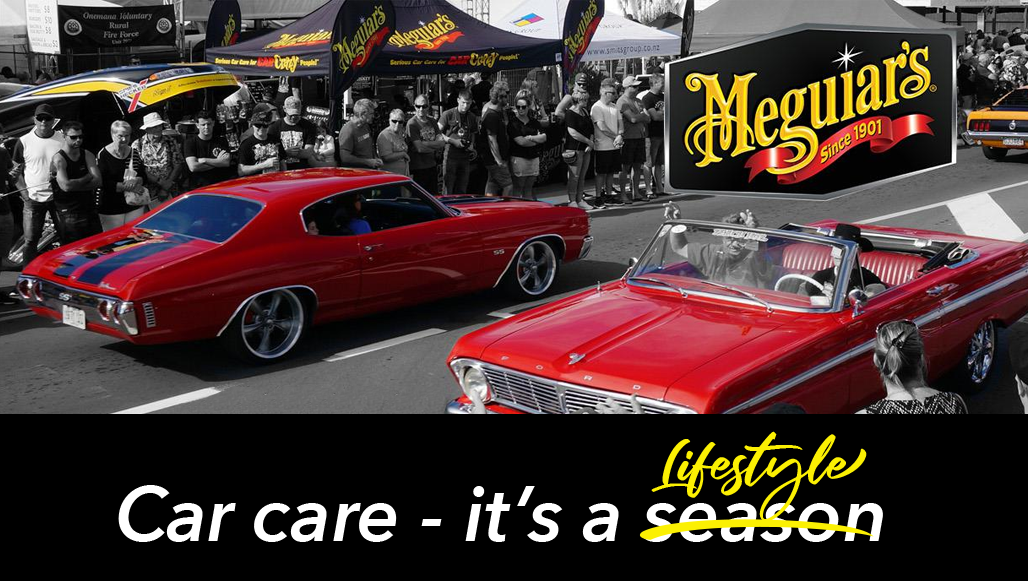 Meguiar's has been at the forefront of developing polishes, compounds, waxes and other surface protectants, to restore colour, clarity, gloss, shine and protection to your paint, tyres, plastic, vinyl and trim.

For over 120 years, Meguiar's has worked with the companies making the paint that is applied to vehicles at OEM level (car manufacturers), right on the assembly line, developing and providing paint correction solutions, which naturally transcend into the refinishing industry (local custom and paint and panel repair shops).

Paint is a thin, delicate coating, that is easily dulled and scratched. It takes a selection of the right products, correct application and proper techniques to restore paint to a clear, glossy finish.

Meguiar's New Zealand was launched in 1993 and quickly became the New Zealand car guy's go to for car wash, car wax, wheel cleaners, tyres shine and everything car care related. Right from the onset, Meguiar's NZ has been dedicated to supporting the car hobby in New Zealand, as it's a passion our team share.

Our technical team have all come from the auto industry, predominantly the refinishing industry, so if you have a query about paint correction, you bet they can assist. We love to share our knowledge, skills, experience and passion with fellow car enthusiasts, for us - car care is a lifestyle.

Throughout the years, Meguiar's NZ has been supporting car clubs by way of prize packs, goodie bags, samples and merchandise for their events. We also host several club nights at our Meguiar's HQ, in Auckland where club members can come in and learn all the basics of car care, ask any technical questions they have and stock up on their favourite products. - contact us at promotions@smitsgroup.co.nz for more information on hosting a Meguiar's Car Care Club Night.

If you've attended various car shows around the country, chances are Meguiar's were there too, we love to be where the cars are and most often attend the shows to deliver expert advice, product specials, new product launches and to check out the cars! 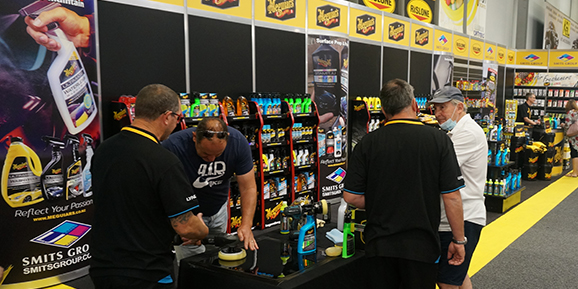 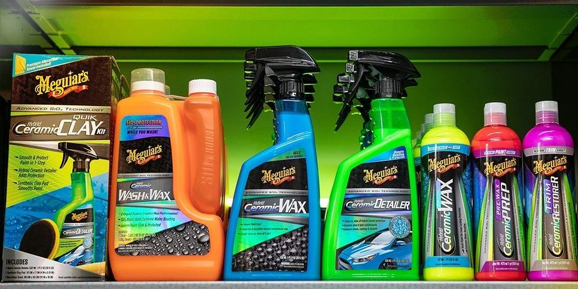 Meguiar’s advanced chemical technology is what sets our car care range apart from the many imitators. As partner to global powerhouse, 3M, Meguiar’s has at its disposal the scientific and technical might of 3M’s many thousands world-renowned researchers, plus state-of-the-art research facilities. This excellence through innovation, is key to Meguiar’s maintaining its position as the world’s most respected and market leading car care brand. 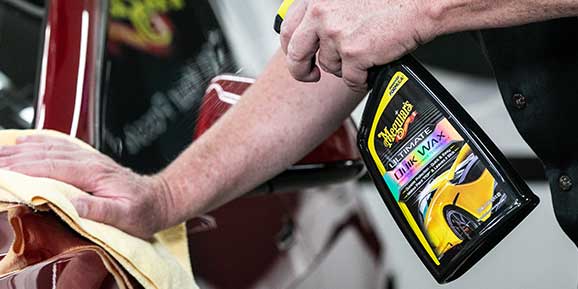 Globally Meguiar's can be seen at almost every car show, either showcasing new products, providing demonstrations and proudly being used to maintain the show winning shine on the vehicles being displayed for the masses. Meguiar's has an extensive range of car care products and accessories necessary for achieving a show car shine, and it's our mission to assist car proud owners, enthusiasts and professional car detailers with the right tools, products and knowledge to achieve the best results they can.

Meguiar's passion for car care transcends the research, development and manufacturing of high quality category leading products. Our mission is to fuel the passion people have for their cars. We strive to empower all people with the ability to create awe-inspiring results they can be proud of because we believe every ride matters!

Founded by Frank Meguiar Snr in 1901, Meguiar’s Inc started as a simple furniture polish manufacturer run out of the garage of Frank’s Indiana home. Upon relocating to Southern California in 1913, Frank was inspired by California’s emerging car culture – prompting him to focus on Meguiar’s Inc’s range of professional products. From there, Meguiar’s has grown into one of the world’s leading surface care specialists – polishing the world’s planes, trains and automobiles ever since. Frank was succeeded by son, Malcolm Meguiar, followed by grandson Barry Meguiar – with Meguiar’s Inc remaining a family-owned company until the mid 2000s, before ultimately amalgamating with 3M in 2008. 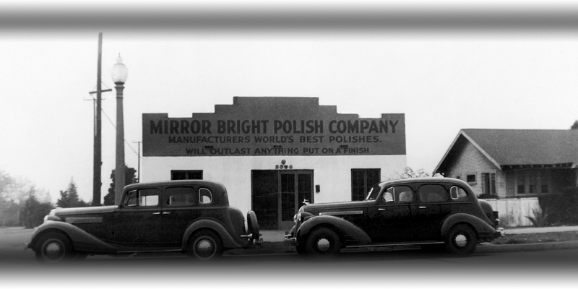 MEGUIAR'S THROUGH THE YEARS

Passion Still Remains Strong to be "The Surface Care Specialists”

What began a century ago as a simple furniture polish laboratory and plant in the garage of founder Frank Meguiar Jr., now spans the globe as an international car care brand. Celebrating its 120th anniversary in 2021, Meguiar's® Inc. has become one of the world's leading surface care product companies, providing highly specialised products for almost every conceivable type of surface.

The difference for the Meguiar's® brand has been the inborn passion for what we do; it fuels the driving force that moves us forward and exhilarates us every day. We view the company as much more than a business or an opportunity to make money - Meguiar's products are a way to provide car crazy enthusiasts an opportunity to express their utmost pride with their vehicle and overall passion for the car hobby.

In his wildest dreams, it's doubtful that in 1901 Frank Meguiar Jr., could have foreseen what his first bottle of furniture polish would evolve into over the next 110 years. When Meguiar first began, he made one bottle of polish at a time using an eggbeater. Eventually he was able to produce enough products at night to fill the orders he would generate the next day and pay for the family's groceries.

The arrival of the first horseless carriages turned Frank Meguiar's attention to the automobile. Made out of wood, they were initially coated with the same finishes that were applied to furniture. It was an easy transition that set the course for the company's preeminence in the car wax business today.

From his first bottle of furniture polish, Frank Meguiar Jr. was steadfastly determined never to sell a product unless he was convinced it was the very best of its kind on the market. To this day, the company follows that dictate and, as a result, has generated millions of enthusiastic users around the world. We describe our customers as "raving fans."

When Frank Meguiar Jr. passed away in 1950, his three sons, who were his business partners, took the company to the next level. Maurice, the oldest, was the sales manager. Next came Malcolm, who shared his dad's love for formulating and created most of the products that the company offered, some of which are still marketed today, including Meguiar's Cleaner Wax, which is still one of the best selling liquid car waxes in America. The youngest of the three brothers, Kenneth, was in charge of production. It was the perfect partnership and through their hard work and leadership the company thrived through its second generation.

In the early years, Meguiar's Mirror Glaze polishes and waxes, intended for professional use, were primarily used by car manufacturers, car dealers, body shops and detailers. Most custom painters polished their customer's automobiles with Meguiar's products, so the majority of cars put on display in car shows reflected finishes achieved with the use of Meguiar's professional line products. As car shows became prevalent in the 60's, those attending began to recognise that the use of Meguiar's polishes was the key to create brilliant, high gloss finishes. Growing numbers of people began pressuring retailers to stock Meguiar's Mirror Glaze products. Compelled by the demands of these enthusiastic fans, the family formally introduced its Meguiar's brand of consumer automotive products in 1973, headed by current President of Meguiar's Inc. Barry Meguiar, the son of Malcolm Meguiar. Fast forward to today, the Meguiar's line of products still saturate the consumer marketplace, offering car care solutions for the hobbyist and the do it yourself lover alike.

From its inception, Meguiar's has been an active participant in the collector car hobby. Barry Meguiar explains, "We are car guys who happen to be in the car wax business. The ultimate experience for us comes when our two passions merge in the exhilaration of "Best of Show" winners who regularly use our products."

Meguiar's sponsors and staffs more than 100 car show events across the country and around the world each year featuring every type of collector car from hot rods and muscle cars to exotic sports cars and vintage classics. In addition, the company supports more than 3,500 car club events every year. At almost every car show and automotive museum in the country, you will find an abundance of Meguiar's products proudly used to maintain and showcase prized automobiles.